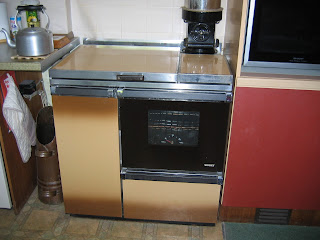 Back in 1987, when we first moved in to Wilanson, we had great ideas of being able to heat the bungalow with wood and bought a woodburner for the front room and a solid fuel fired cooker/boiler for the kitchen.  The 'Bosky 20' seemed like just the thing for us.

We soon discovered that, although it delivered excellent cooking and central heating power by burning wood, we just could not keep up with its voracious appetite and so needed to start buying in solid fuel as well.

That went well and we certainly kept nice and warm but we eventually started considering the possibility of converting it to oil.  Less mess, no ash to clear or coal to fetch.  The conversion was fitted in 1996 and it too was efficient.

The only problem was the noise.  Unsuspecting visitors sometimes had rather a shock when the sound of Concorde taking off emanated from the kitchen!

In the course of looking at cookers for the boat, we had come across Heritage Cookers.  We didn't opt for one of their cookers on the boat, but were impressed and so, when thinking of replacing the old Bosky, we went and checked them out in Liskeard.  A few days later, we placed our order.

In 1987, we had managed to bring the Bosky into the house, rolling it on old fence posts.  The same method worked again, 26 years later, and it took up temporary residence in the porch, awaiting its sale on eBay.  We agreed a sale at a VERY low price, but the main value to us was that the purchaser took it away for nothing. 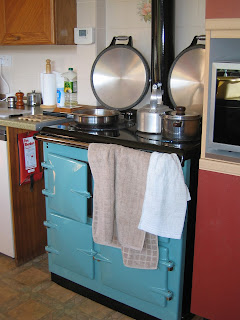 On 21st June, our new 'Compact Duette' was delivered from Heritage Cookers in Liskeard.  The colour is a little greener than it seems in this photo, but still slightly 'bluer' than some of the greens in the rest of the kitchen.  Some changes may be needed in any case.

There was quite a bit of plumbing and wiring to do in order to connect the Heritage and modify the central heating system, so we had to wait until 11th July to have it commissioned.  A few relatively minor leaks were soon sorted out, and then all was fine. 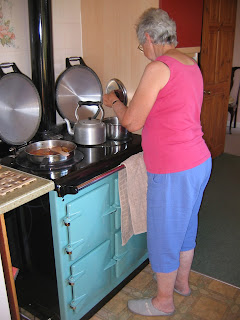 Val has given herself a little while to get used to her new cooker, but really enjoys its strong heat and heat-retentive hobs.  You can hear it running, but conversations with the cook are now much more possible!

A brilliant bit of kit, and it seems to be running very economically.  Thoroughly recommended, a really good range cooker/boiler, and a very helpful company.
Posted by Dave and Val Taylor at 22:57

Dave and Val Taylor
Lapford, Crediton, Devon, United Kingdom
After nearly 6 years living on our narrowboat 'Zindagi', we returned to rural mid-Devon in January 2013 and are still busy sorting out our bungalow and the 4 acres of land. The bungalow is looking much better, but getting the land back to good condition again will take a LOT longer! We seem to have re-started 'life on the land' - for the foreseeable future, anyway.